Welcome to the home of all things Pinkwater!

Pinkwater fan Shaenon Garrity has some delightful fan art to celebrate the enticing preview of Daniel’s latest book on Twitter.

Welcome to the new and somewhat-improved pinkwater.com! We’ve changed the layout a bit, but the basic components of the site are the same. Let us know if you run into any glitches, and we’ll fix them toot sweet!

Say hello to the newest book from Daniel Pinkwater: “Mrs. Noodlekugel,” illustrated by Adam Stower. Here’s what the critics are saying:
END_OF_DOCUMENT_TOKEN_TO_BE_REPLACED

Daniel sounds off in the Daily News about the “Pineapple and Hare” question. Read it.

The story behind “The Pineapple and the Hare”

OK, here is the deal. There are these companies that make up tests and various reading materials, and sell them to state departments of education for vast sums of money. One of the things they do is purchase rights from authors to use excerpts from books. For these they pay the authors non-vast sums of money. Then they edit the passages according to….I have no idea what perceived requirements. Here is the story as it appears in BORGEL, a novel I wrote. Borgel, who is 111 years old is telling this story and similar ones to his great-great nephew while riding on a bus:

The Story of the Rabbit and the Eggplant

Once there was a race between a rabbit and an eggplant. Now, the eggplant, as you know, is a member of the vegetable kingdom, and the rabbit is a very fast animal.

Everybody bet lots of money on the eggplant, thinking that if a vegetable challenges a live animal with four legs to a race, then it must be that the vegetable knows something.

People expected the eggplant to win the race by some clever trick of philosophy. The race was started, and there was a lot of cheering. The rabbit streaked out of sight.

The eggplant just sat there at the starting line. Everybody knew that in some surprising way the eggplant would wind up winning the race.

Nothing of the sort happened. Eventually, the rabbit crossed the finish line and the eggplant hadn’t moved an inch.

The spectators ate the eggplant.

Moral: Never bet on an eggplant.

I don’t know how the test publishing company changed the story. I gather they decided to call the rabbit a hare, and made the eggplant into a pineapple. Also there appears to be something about sleeves. And they made up questions for the students to answer. I would not have done any of these things. But it has nothing to do with me. I cashed the check they sent me after about 8 months, and took my wife out to lunch at a cheap restaurant. I believe, she ordered eggplant. 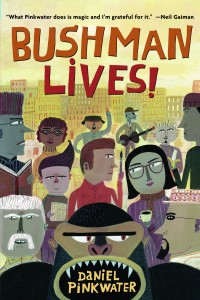 Here’s the cover of the upcoming “Bushman Lives,” illustrated by Calef Brown. The book is available for pre-ordering at your favourite retailer!

I Want my Hat Back 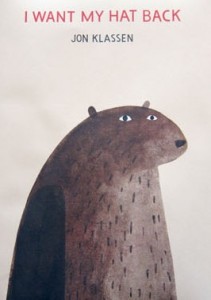 DP was on NPR’s Weekend Edition Saturday, reading the book “I Want my Hat Back,” by Jon Klassen. Listen to the segment here!

This post is filed under Media appearances, New books.

A Message from Daniel

I want to thank kindly Webmaster Ed, and the many readers who sent such delightful birthday greetings, works of art and literature, personal notes, and only one document of psychiatric interest. (Which, I have to say, was my favorite thing in the package). It’s not for me to say, or know, if I am such a great author–but it is certain I have the best possible readers. It is my greatest pride that people such as yourselves tend to favor my work. So, I thank you for your congratulations on continuing to survive, and I congratulate you right back for being who you are.

P.S. Being 70 feels absolutely no different, but I have already used the phrase “breaking an old man’s heart,” in a letter to an editor. This old business will come in handy. 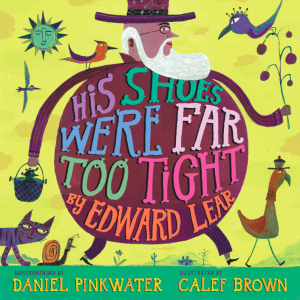 Chronicle Books announces His Shoes were Far Too Tight, a collection of poems by Edward Lear, selected and introduced by Daniel Pinkwater, with illustrations by Calef Brown. Coming in March 2011.

How to get in touch